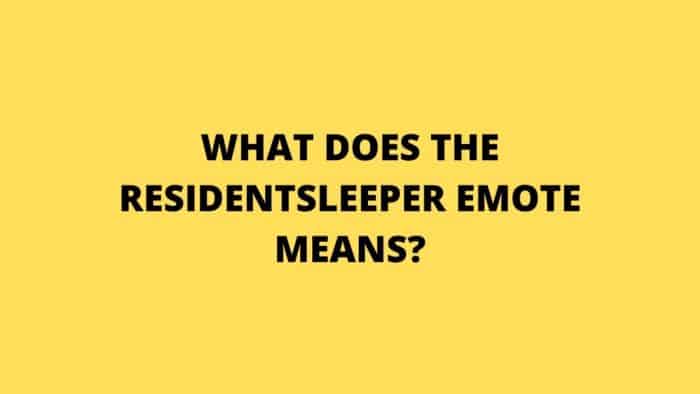 The ResidentSleepper is a twitch emote. The emote was used when a stream was boring.

If you find ResidentSleeper emote in any streamer chat than this probably means you should go ahead and find another stream.

If you don’t know what is twitch then I am wondering, “in which world do you live?”. Twitch is the most popular game streaming platform and no wonders that the platform also following the emoji craze. The emoji used on the platform is quite different from one we found on our smartphone.

The Origin of Emote?

The Emote originated from the OddlerPro’s live stream. In 2008, he fall asleep on his 72 hours long live stream of Resident Evil on September 29th 2012.

The spread of ResidentSleeper Emote:

ResidentSleeper is one of the earliest emote on the twitch platform and it has been used daily since its Appearance on the Twitch. According to the stream element website data, it is the 28th most popular emote on the platform.

So, the name comes from the combination of Resident Evil and sleeping. It was his third try of 72 hours stream and his last attempt also. We have linked the clip of the stream from where the emote comes from.

Below you can check out Oddlepro’s reaction on the Emote:

Oddlepro streams Resident Evil so if you like the game then you should go and check him out.

Why ResidentSleeper Emote is removed?

Twitch has removed the ResidentSleeper as a global emote stating that:

We will soon retire some older global emotes and remove or replace some others by request. For many of our older global emotes, we only have low resolution 28×28 images (and no original file to improve), and at some point in the future, this size will be relatively obsolete. This is an ongoing effort.

As of today, we have been requested to remove ResidentSleeper and WinWaker. As bummed as we are about these, we’re working on a contest for a new ResidentSleeper. We’ll be making an announcement soonTM.